Colossus and the Rocks of our Solar System 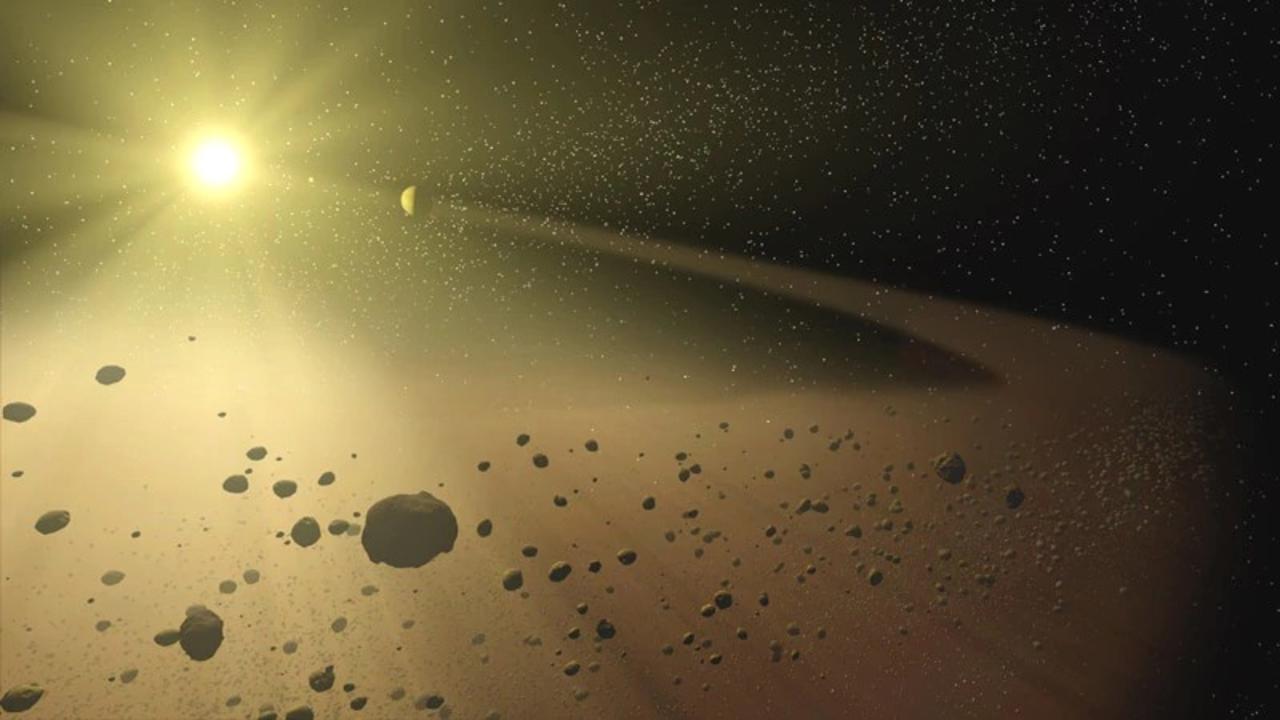 Is it only 8 planets, what else makes up our solar system?

What Are The Differences Between An Asteroid, Comet, Meteoroid, Meteor and Meteorite?

Comet:  A relatively small, possibly active, object whose ice can vaporize in sunlight, comas [co-muh], or tails of gas and dust.

Meteoroid: A small bit of a comet or asteroid that orbits the Sun

Meteor: The light we see when a meteoroid enters the Earth's atmosphere and vaporizes. This is known as a shooting star or a meteor shower.

Meteorite: A meteoroid that makes it through Earth’s atmosphere and lands.

Next, we'll move on to where these icy bodies can live.

When the Solar System was just beginning to form, bits of rock, metal, and dust that circled the Sun starting clumping together to form large bodies, some of which became planets. However, not all of these combined to form planets. Some particles left over settled between Mars and Jupiter, forming the Asteroid Belt.

The Asteroid Belt contains billions, and  maybe even trillions of asteroids. Most of these range from the size of boulders to a few thousand feet in diameter. In fact, people used to believe that the asteroid belt was made up of the remains of a planet, or one that didn’t quite finish forming. However, according to NASA, the total mass of the asteroid belt is actually less than the moon!, far too small to weigh in as a planet.

In 1943, astronomer Kenneth Edgeworth put forth that more objects that orbit the Sun might exist beyond Neptune. In 1951, astronomer Gerard Kuiper predicted the existence of this ring of icy bodies as well. While today we call it the Kuiper Belt, some astronomers refer to it as the Edgeworth-Kuiper Belt.

Beyond our furthest planet Neptune, lies a region of space filled with these icy bodies. The Kuiper Belt includes trillions of objects, more than the Asteroid Belt, that remain from the early solar system.

The Kuiper Belt is an elliptical plane in space spanning from 30 times Earth's distance from the sun to 50 times that. That’s up to 4.5 billion miles! The Kuiper Belt is similar to the asteroid belt, but KBO’s or Kuiper Belt Objects, tend to be more icy rather than rocky.

Scientists estimate that thousands of bodies more than 62 miles in diameter travel around the sun in the Kuiper Belt, along with trillions of smaller objects like comets. “The region also contains several dwarf planets — round worlds too large to be considered asteroids and yet not qualifying as planets because they're too small, on an odd orbit, and don't clear out the space around them the way the eight planets do.”

In 1950, Dutch astronomer Jan Oort wonders about comets that entered the solar system that they came from a cloud of icy bodies that may lie as far as 100,000 times Earth's distance from the sun, a distance of up to 9.3 trillion miles (15 trillion kilometers).

We call it, the Oort Cloud, A giant shell of icy bodies thought to surround the solar system not as a disc, but a sphere, completely encapsulating our solar system with possibly trillions of frozen comets and asteroids.

These far away bodies are primarily composed of ices such as ammonia, methane, and water. These chucks are straight from the formation of our Solar System, and could give us insight into the environment we formed in.